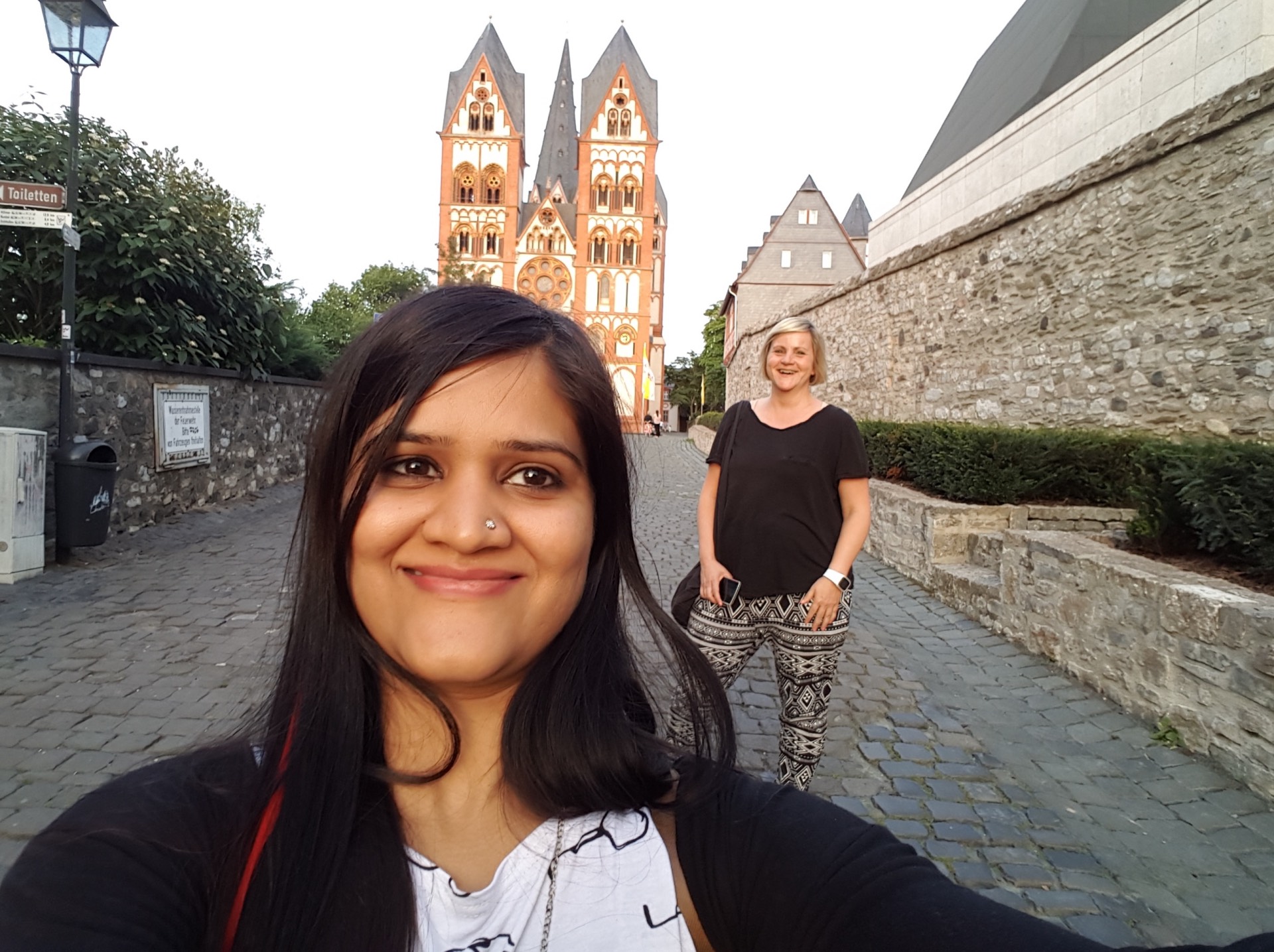 For the next two weeks I will be travelling across Europe with my friend Yogyta from Delhi who has left her country for the very first time in her life to come and see some of Europe with me. One thing that I really love about travelling is that it not only widens your horizon but it allows you to change your perspective and experience the world from a different angle. For the next two weeks I’d like to share Yogyta’s view with you. So please fasten your seatbelt, put your seat in an upright position and enjoy the journey with us!

I met Yogyta at the Parmarth Niketan Ashram in India where I spent some weeks when I started my trip around the world. We both were there to slow down a little and learn more about ourselvses. While Yogyta joined a one week Yoga intensive class at the Ashram, I was there by myself, trying to figure out whether leaving my comfort zone to learn about Shanti and Om was doing me any good.

Yogyta’s Yoga class was very present at the Ashram. All dressed up in complete white clothes, having food in a separate part of the Ashram – I was very curious. We had adjacent rooms at the Ashram, so one day I overheard it was Yogyta’s 30th birthday and that day I started to spend time with that really interesting group of people. Vikram, Arun, Arpita, Avneet, Satpu and Yogyta had come to the Ashram from all across India and then there was Alanna from Canada, Silvia, a ballet teacher from Argentina and Alon and Karni, a very nice couple from Israel.

Yogyta is a 30 year old woman from Delhi who only started realizing she had the travel bug a couple of years ago. So she started travelling in India whenever she would have some spare time. During the week she works in business research in one of Delhi’s numerous office buildings. On weekends or holidays she travels her own country which is so diverse and rich in culture that a lifetime is not long enough to discover its beauty in depth.

Travelling solo is very uncommon for Indian women, especially at Yogyta’s age. Society’s expectation is you should spend some effort in getting married and not run around spending money. Yogyta choses to travel and I encouraged her to come visit me in Germany.

So here we are, almost one year later. I picked Yogyta up in Frankfurt last night and the next two weeks will be filled with exploring and conversations about our different perceptions.

Yogyta arrived in the evening after a long day of travelling but I wanted to show her one sight along the way from Frankfurt to Cologne. So we stopped in the picturesque town of Limburg where we visited the beautiful cathedral before ending the day with fast food and Kölsch, a beer from Cologne.

We are lucky enough to spend two nights outside Cologne at my best friend’s place so that Yogyta gets to see a typical Rhineland village and a family home.

The very first impressions Yogyta shared with me after arrival made me laugh. One of them was that everybody was just so tense and not smiling which is something I find awkward myself everytime I come back to Germany after having travelled for a while. Then there was the highway. There was not a lot of traffic, so I could drive pretty fast and she was fascinated with the nonexistent speed limit on some parts of the A3. The maxium speed allowed around Delhi is 80 kilometres per hour so I guess sitting in a car doing 180 is a hell of a ride. The next thing that came to her mind while it was getting dark and I slowed down a little as my sight is horrible in the dark (I’m getting old) was the question why there were no lights on the highway and I loved how she compared the highway to a castle that shall not be entered – “like the Maharajas who don’t light the outside area so that people don’t feel welcome.”

There are a lot more observations Yogyta made on her first day but time is limited and we will go and explore Cologne now. I’ll keep you posted.