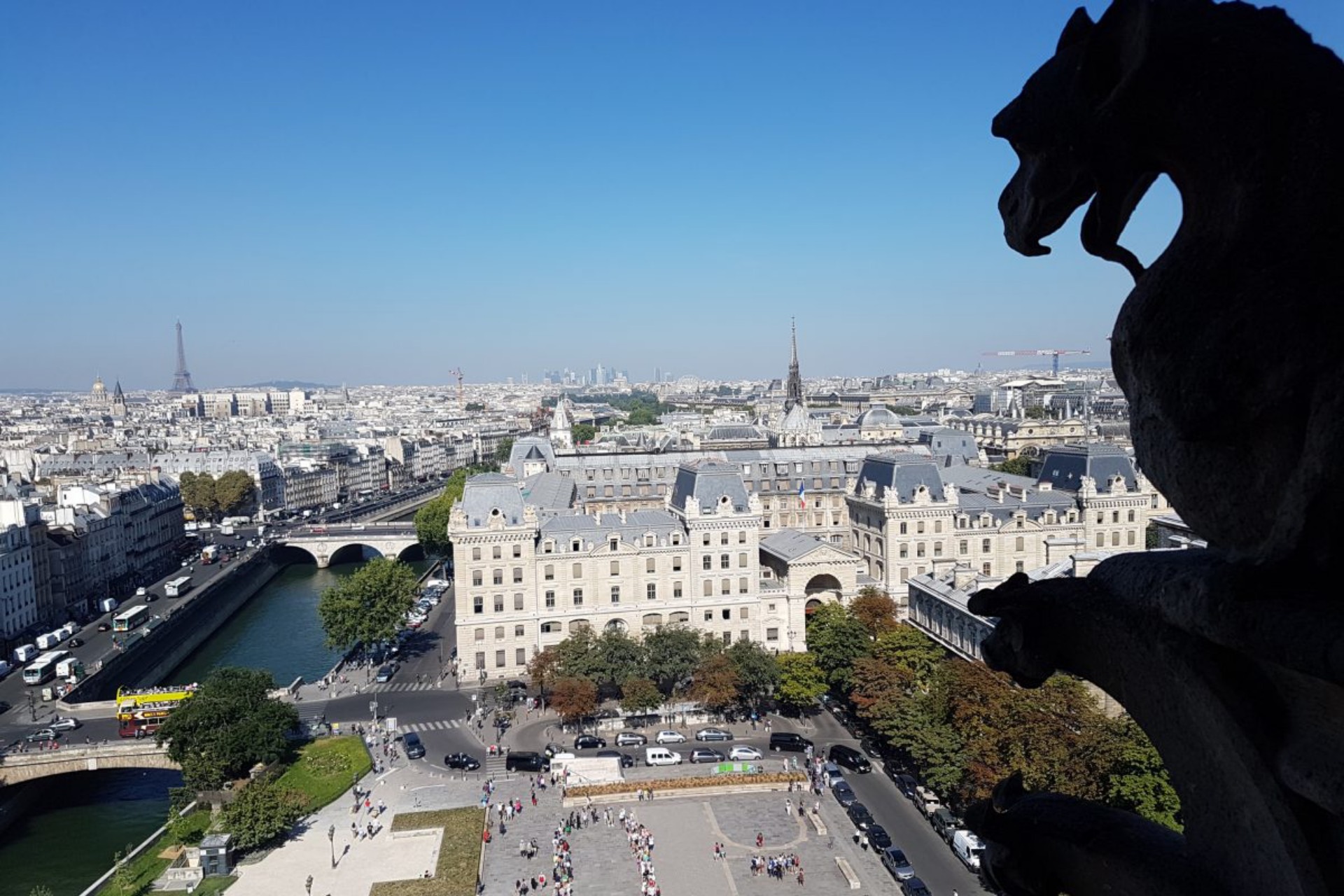 Yesterday was a very touristy day but how can you be in Paris for the first time in your life and not go and see the Eiffel tower, the Louvre, Notre Dame and all those other beautiful attractions? I wanted to show Yogyta some of the major sights so we started quite early.

Notre Dame – how not to queue

The first stop was the famous cathedral Notre Dame de Paris at the Ile de la cité. The tower, which offers a stunning view, opens at 10 am and if you don’t want to hang around there all day, make sure to be there either a while before they allow people in or a little while before it closes.

422 steps lead up and there are two platforms offering stunning views on the city. We were lucky enough to have perfect weather and a really good sight – Yogyta was overwhelmed by the beauty of the city and the Seine. Finally I got to see that big smile on her face that I was missing. When I travel, I get really excited and happy when I see a spot I always imagined to see while Yogyta didn’t show to much of a reaction. When I asked her about it she said, she didn’t want to be that girl from India who travels abroad for the first time and is all excited – but hey, what’s wrong with that? Travelling is super exciting and beautiful.

A stroll along the Seine

The Seine, sunshine and time off – what more can you wish for? Paris was treating us very well yesterday, so after a little shopping detour we walked along the Seine for a while. Close to Pont Neuf you find the Paris-Plage, a small sand beach that has been set up at the bank of the river. It was so nice to just watch all those people enjoying themselves in the sun. You can even have a spray shower to refresh.

After the walk we sat at the Louvre for a little while.

When we went for the Eiffel tower before dusk, I told Yogyta I was taking her to Montmartre. So she was really excited when we left the Metro and she could see the tower. It was totally worth telling a little lie.

As I love to explore places on my own I assumed it might be nice to leave her alone for a while so she could take the view in and take her time. I sat by the bridge and enjoyed the sun while she explored the tower from all sides.

Paris feels so different this time – nearly deserted as the tourists are not really visiting after the recent attacks. Imagine the usual crowds at the sights and then divide them by five – it’s as ’empty’ as that.

When Yogyta was done strolling around, I took her a little up the hill towards Trocadero to sit and enjoy the view from there. It was a really relaxed atmosphere – that is if you ignore the hundreds of guys around selling the miniature Eiffel towers or playing shell games. This seems to be the major tourist scam in Paris.

I told Yogyta how these guys trick people into gambling with them. In case you haven’t seen it yourself, this is how it works: You have to find a little ball which is hidden under one of three little cups. The challenge is to remember under which cup the ball is while the dealer is moving the cups and changing their position. There will be a group of people with the dealer who pretend to play the game, betting 50 or 100 Euro. They will win and lose to trick you into believing you have a good chance of going home with a pile of money but actually the ball is long gone when you guess where it is, so you don’t have a chance at all.

After I told Yogyta about this, we sat and watched one of those groups tricking a tourist into losing 50 Euro. Usually I would have told the guy it’s a ripoff but of course it was very interesting to watch the whole procedure. Two women and one man were with the dealer and the acting was so bad, you could nominate it for the golden raspberry. They would win 100, 200 Euro without showing anything like excitement and when one of the women ‘lost’ 100 Euro it didn’t seem to bother her at all. In fact she was assuring her hair was looking ok. We kept watching the game for a little while until we saw the people dancing nearby.

In some European cities you will find spots where people come to dance together in summer. They don’t necessarily know each other and it’s beautiful to see them dance and enjoy themselves.

The next thing that happened was shocking: a little boy – about four years old – was buried under a barrier that fell down on him when he held onto it. It hit his head and Yogyta and I were frozen for a second, thinking he might have hurt himself very badly. His mother was there right away and within seconds five young soldiers who were patroling with machine guns to make us feel safe after the recent attacks came over to ensure the boy was ok and to take the barrier to a place where it couldn’t do more harm. It was a surreal scenery: The Eiffel tower in the sunset, the crying boy and those soldiers in their camouflage uniforms, holding machine guns, comforting a little boy.

The bikini turned 70 as it seems. All across Paris you can see posters advertising the ‘Exposition Le Bikini a 70 ans’. I noticed that Yogyta seemed a little confused by those posters and a little while later she asked me what the deal with these Bikini ads was. I told her and when we walked along the Seine from Eiffel tower in the dark and walked past another one of those ads, she stood still and said. ‘Bikini, I don’t even know how to react to that. There’s people in my country who don’t have food!’ This was sad and funny at the same time. Sad because it’s true and funny because of the way she said it. Imagine that short Indian woman getting all upset about the yellow bikinis. I burst out laughing and we both couldn’t stop for a while.

First world problems are  something we talk about a lot while we explore the city. It’s interesting for both of us to learn about the things that people consider being important in our societies. After all, everyone wants to be better off but it makes a hell of a difference if being better off means to know how to feed your family or to decide whether your kid can meet the neighbour’s child in between Cello lesson and soccer training.

A cab ride to remember

So I thought that my french is limited to only a couple of words but when taking the cab to go back to our hotel, I found myself starting a conversation with the driver. I actually felt like small talk and so I asked him why there weren’t a lot of tourists around.

Within seconds our driver started talking like there’s no tomorrow and – surprisingly enough – I understood him. Somehow I managed to cover the fact that searching for words to be a part of that conversation took a lot of time – maybe my friends wouldn’t tell my french version to slow down…

Within minutes we discussed tourism, prices, Merkel’s decision making concerning the refugees and when I accidentally said toi instead of vous and apologized the driver was Prince charming saying a little more familiarity was always good.

I love those encounters, that was pretty intense.

I am getting ridiculously tired now – so I will call it a day. Yogyta is hopefully on top of the Eiffel Tower right now.